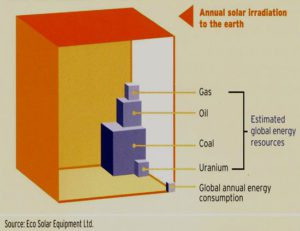 The majority of African countries spend most of their income earned from export on fuel imports. Many among them spend more than that, i.e. these fuel imports are partly paid from development aid monies.

One must therefore ask if a country’s development based on finite fossil energy would be a sound foundation on which Africa’s visions can be achieved.

Time and again we must look at the trade-off between national energy autonomy versus larger regional power pools, the latter being based on costly power lines or other means of transport for energy.

National energy autonomy based on a renewable energy scenario will assign funds for the development of rural areas and centres immediately. A power pool will require costly infrastructure before the first hut in a rural area is electrified. Power Pools technically allow the import and export between countries. In practise they create unhealthy dependencies. Everybody will import from the current cheapest exporter and neglect the development of own generating capacities. Namibia had to learn a lesson after the power purchase agreement with South Africa had to be re-negotiated and excess energy from this country ceased to be available. A forgotten bolt in a nuclear power station near Cape Town has strong repercussions for the availability of power in Namibia.

On the other side sun and wind can be regarded as Namibia’s indigenous energy. Our politicians talk so much about “value adding” when it comes to exporting products from Namibia and they rightly do so. But at times where we hit the three existential limits of the fossil based energy system – depletion of fuel, climate-incompatibility and rising violence for resource access – the added value from our own renewable energy sources is not adequately recognized. The following diagram puts it into perspective: all remaining finite resources are only a minute fraction of what the sun offers each year in a renewable way.